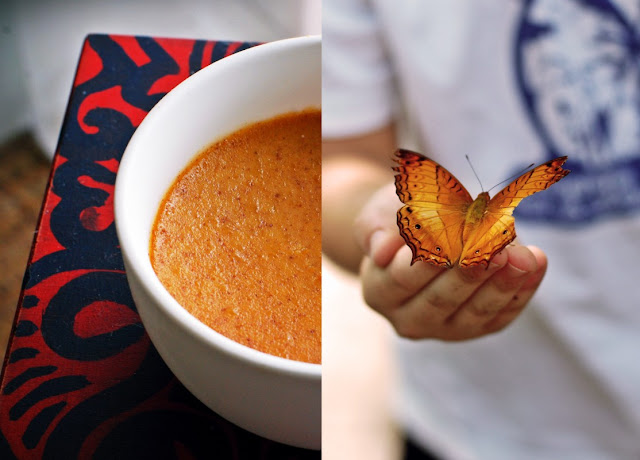 You can find my serious voice for this recipe at The Daily News Egypt.

Dear Butternut Squash,
I'm sorry I never bothered making you before. I know, I know. I've tried out quite a variety of things in the short time I've been cooking but you, I never bothered to pay attention to you. You see, before I dealt with you, I thought you were just a pumpkin. A kind of long pumpkin that couldn't really be any more interesting than a regular pumpkin. Shocking really. Thinking about it. I'm not to be blamed. There's no winter in Malaysia so we're not really looking for winter squash now, are we? And you're a winter squash, baby. I'm so horribly sorry. I know this hurts. See, I thought your skin was a lot thicker than what it actually turned out to be. I can peel off your layers a lot easier than I thought. You're such a fragile, delicate thing when you're scorched but sometimes, Butternut, that's the way some souls should be dealt with and you should accept that. So now that I've used you, I hope you're happy. I'm not sure how often I'll call but I'll give you a call again sometime soon. I hope you'll be waiting by the phone.
Yours until you enter my body,
User Not Abuser
P.S. I'd like to thank my stepkids for being my hand models on occasion. Butterflies love you and so do I. 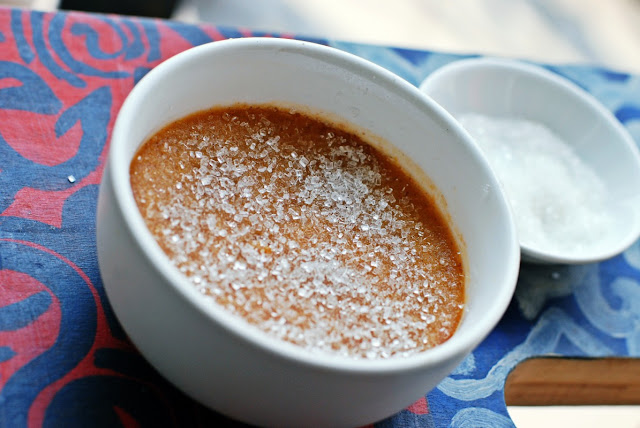 Butternut Squash Brulée
You'll need:
1 cup of butternut squash purée (I roasted a 1 kg one and pureed it. You'll need half of that.)
3 large egg yolks
1/2 cup of brown sugar
1/2 cup of hot heavy cream left to cool
1 full teaspoon of cinnamon
1/2 a teaspoon of allspice
1 teaspoon of vanilla extract
A small pinch of salt
1 tablespoon of sugar, per ramekin 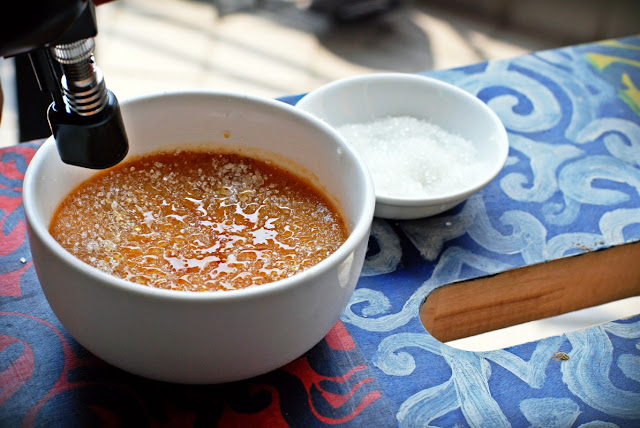 Preheat your oven to 175 degrees Celsius. In a bowl, combine the egg yolks and the brown sugar and whisk until you get a nice deep color and a relatively smooth consistency. This took me around a 1.5-2 minutes. Pour in the cream slowly while whisking continuously. Blend in the vanilla, cinnamon and all spice until all is combined. Add the butternut squash and stir until it all comes together. Divide the mixture between 6 ramekins. Place the ramekins in a roasting dish and pour water in until it reaches halfway. Make sure you don't get water into your ramekins. Bake for 30 minutes. It should be set but should tremble a little in the center. The jiggle shouldn't be liquidy. You're looking for a relatively firm jiggle. Refrigerate for at least 3 hours and up to 3 days. When you're ready to serve, sprinkle a layer of sugar. Make sure it's spread evenly. You can either use a propane torch to caramelize the top or you could place it under a hot grill for up to 5 minutes at the most. Make sure to watch it carefully. Allow it to rest for a few minutes and serve. 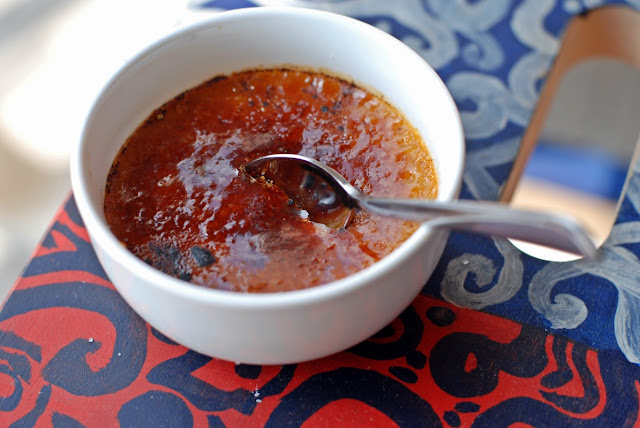 Then you tap on it and make up a song before you crack it. 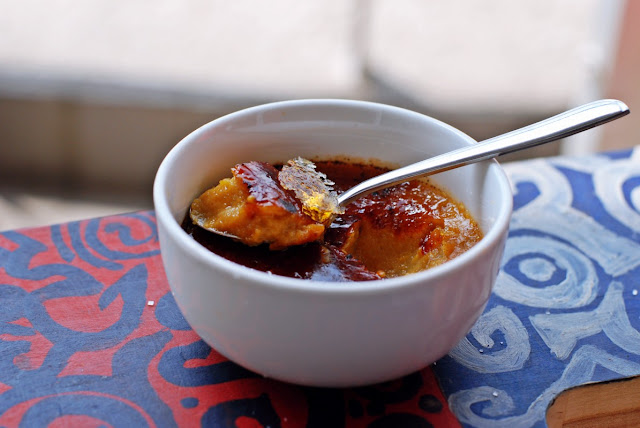 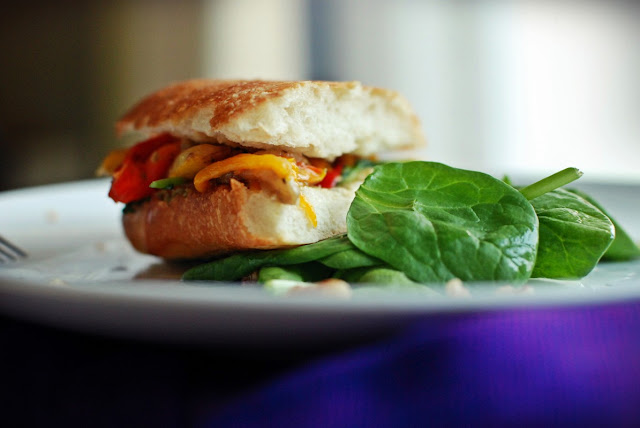 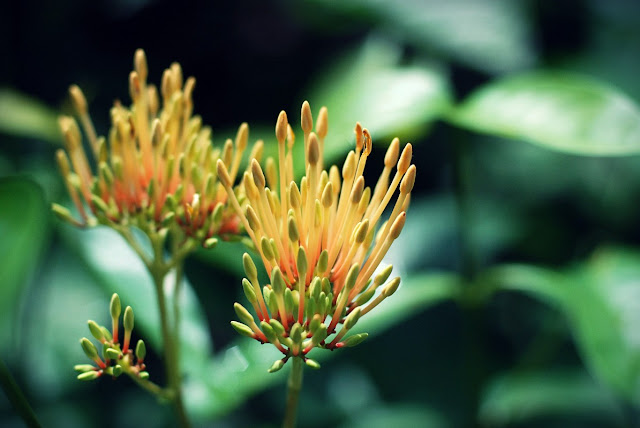 Today is a rare day. Today, the sun is out and there is no gloom yet. Gloom should move. It should reside somewhere else. It should move to the homes of people who ask for fake Rolexes with bad zircons. 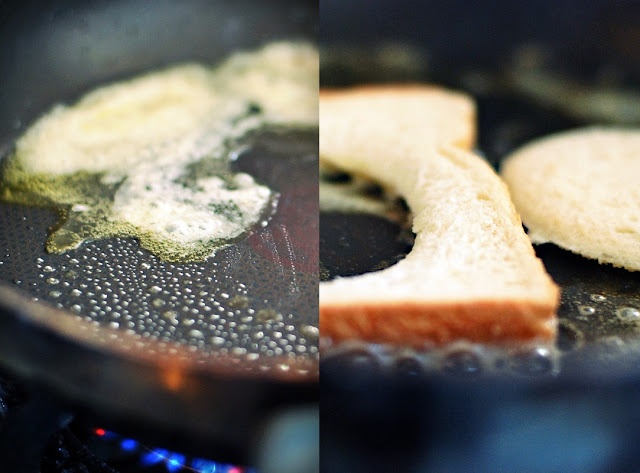 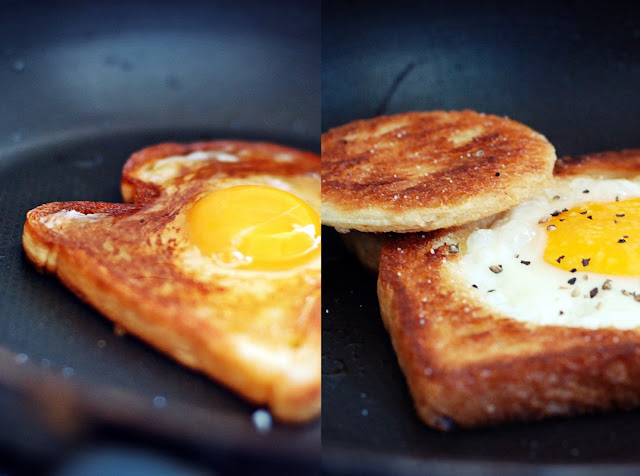 Use something small and with a round edge (like a glass or a cookie-cutter) to cut a hole out of the center of your bread. Don't discard the cutout. Begin melting your butter in a pan over medium-low heat. Toast your bread and cutout on one side in the pan until golden. Don't turn your heat up. You'll risk burning your bread and butter. Turn your bread to the other side as well as your round cutout. Melt a tiny bit of butter in the bread hole, crack the egg directly into the hole and cook until the egg is set to your preference. Season with salt and pepper and serve with the toasted cutout. 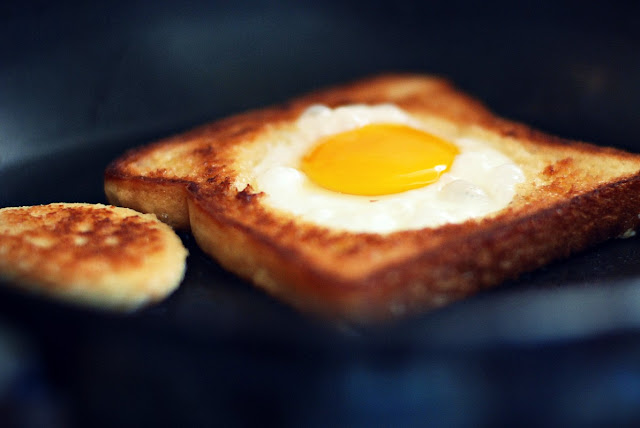