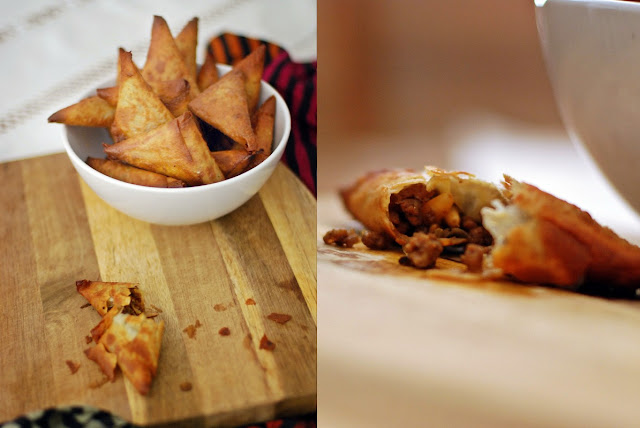 As featured in The Egypt Monocle
Thinking back, samosas may have been the first food to confuse me, a never-ending love affair that was tedious to understand. Never knowing what I should call them when chatting with people hailing from different places, never understanding just what were to go in them, I went on a mental hunt quite early on in life to find out just what a samosa was.
Stuffed with curried potatoes and peas then folded into tight triangles, these were the samosa I was first acquainted with. Popping them straight onto my tongue from the bubbling oil without a second thought would have me letting off the steam with my gaping mouth between grins and greasy stained fingers from the turmeric stirred into this magic mix. These were general fixtures in my Indian grandmother’s house served with a side of mint chutney and later, dominated Ramadan as a simple accompaniment to soup in my Egyptian mother’s home.
At many oriental iftar buffets and at homes of friends from the Levant, I’d spot these little lovelies, shiny skinned and crisp to the tooth, next to others — soft half moons and the doughy tetrahedrons, sported in many contrasting pastry crusts and fleshy fillings to suit the various cravings of those breaking their fast. If I had given in to my whims, I don’t think I would have eaten anything during Ramadan but fat stacks of these Indian-influenced vegetable samosas and Lebanese crescent-shaped sambusak, filled with ground beef and made lively with pine nuts. In fact, I enjoy these pastries, Asian and Middle Eastern alike, so much that I would probably eat them in secret and in defiance if the Middle East decided to adopt Somali group Al Shabaab’s fatwa banning samosas that, according to them, are too western and resemble the Christian Holy Trinity.
Believed to have originated in Central Asia before the 10th century, the Uzbeks still call it somsa, similar to its original name, samsa. The Iranians, as my friend in Malaysia introduced me, call them sambusa these days, but were once recorded in Persian history as “sanbosag”. Similar to the pasties that were eaten by tin miners in Cornwall for their easy handling, samosas were also thought to be injected into Indian culture by the Muslim traders and soldiers who carried them in saddlebags on long journeys after preparing them, many at a time, during their rest stops.
This is a simple recipe, given that you’re fine with the heat of frying. In essence, all you need to do is begin preparing early, make large quantities at a time and freeze them in between layers of baking paper to avoid them sticking to one another as they love to do. There are recipes for all kinds of dough and the filling may be used to stuff your own homemade dough. I chose the easy way out with these store-bought wrappers because I can use Ramadan as an excuse for a little laziness as most of us do.
Beef & Pine Nut Samosa
You’ll need:
30-35 samosa wrappers
500 grams of ground beef
1 large onion
2-3 cloves of garlic, depending on strength
¼ cup of beef stock
½ teaspoon of cinnamon
¼ teaspoon of cumin
¼ cup of pine nuts
Salt and freshly ground pepper
1 large egg + 1 teaspoon of flour, beaten to make a paste
Keep the samosa wrappers covered with a damp towel while preparing the beef to keep them soft. In a large pan on medium-high heat, add the onions and garlic until fragrant and translucent then the ground beef. Stir the beef into the onions and garlic until combined then cook, stirring every few minutes, until browned. Add the cinnamon, cumin, salt and pepper and mix then pour in the beef stock and stir in the pine nuts. Lower your heat and leave to cook until the stock has been absorbed. Turn off your heat and leave to cool.
At the bottom of each samosa pastry strip, brush the bottom of the side closest to you with egg wash then fold over the pastry from the opposite corner to create an open-sided triangle. Spoon some of the beef filling (1 full teaspoon to 1½ teaspoons) into the pocket you’ve created. Tuck the filling into the pocket and fold it over more than once until you reach the end of the wrapper. Before sealing, tuck in any protruding samosa paper then seal the edge by brushing with egg wash. Repeat with the rest of the wrappers. Freeze the ones you won’t fry for later at this stage. Deep fry in hot vegetable oil (not olive oil) for a minute then remove when golden and crispy. Do not crowd your oil with samosas to allow each one adequate space. Drain well from the oil before serving.