As featured in The Egypt Monocle
I was one of the few children allowed into The Ranch without a second look, a bar with Western saloon-style swinging doors that slapped me on the way in a few times too many. My friends by then, nighttime, would have left the hotel for their own homes — the hotel that we played at on weekends, a place my father worked at the time as Food and Beverage Manager, a collective country club of sorts. 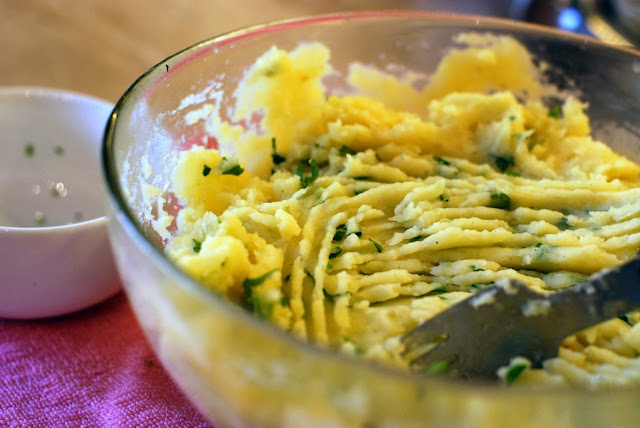 Recovering from the greeting smack of hard wood against my upper back, I would make my way to the highest ground in the place, the bar, to ask the bartender if he had seen my dad. Pointing in the direction of a corner table this time, I spotted him — his strong green eyes looking over at me from across the room for a moment before turning back to the conversation with an important guest he cared not much for.
Walking over, I was oblivious to the drinking surrounding me but snuck quick glances at tables lining my path to feed my appetite after a long day of swimming in the Abu Dhabi sun. Plopping myself on a chair next to my dad, I smiled as my father introduced me to his guest then focused on why I was really there — to eat. I ordered a t-bone steak with a side of turned root vegetables that would guarantee a deep sleep on the car ride back home then diverted my attention to the Filipino band performing international songs to an audience that barely saw them. 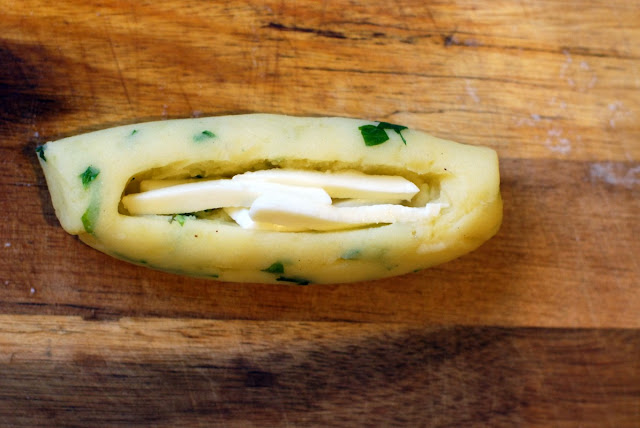 Singing John Denver’s Country Roads, a song I gathered was cool for older intoxicated people from the response it received, the band rattled on together with the aggressive growls of my rumbling stomach. A plate arrived quickly but it was not mine; instead it was to share, along with the mixed nuts and crudités, untouched by the adults entangled in their drinks and discussions. Left unnoticed after our initial hellos, I tuned out of the grown up debates that I couldn’t keep up with and bit into a crisp, fried cylinder, picking it over the raw vegetables drying out in the smoky room. 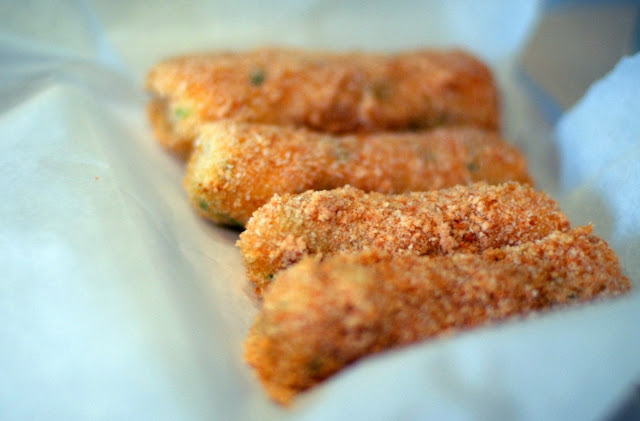 Scorching smooth centers and crunch from the twice-breaded crust, I had one after the other until there were none. Little space was left for my main but I trudged through the steak, happy to ignore my vegetables if my father was too busy to remind me. 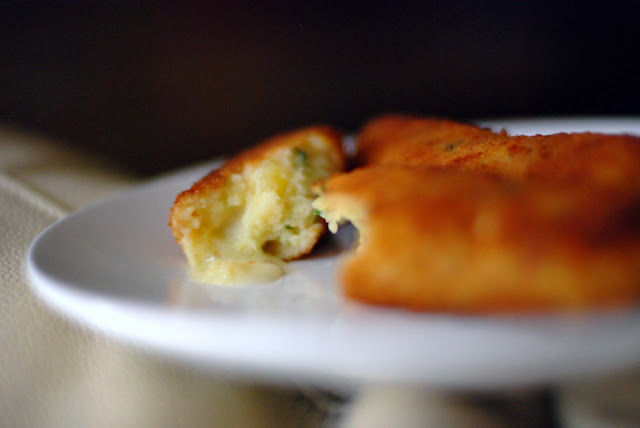 Croquettes, a word coming from the French croquer — “to crunch” with a potato purée filling, a trend that died out  before I was born in the early 80s, were still making me happy in the confused 90s and remain the naughty section of perking up leftover mashed potatoes. This week, they featured in my kitchen with the twang of mustard, a hit of fresh parsley and some soft mozzarella bocconcini. Outdated or not, the croquette is versatile. Mix in flaked fresh salmon, using the potatoes to bind the fish or stick to a vegetarian option with spinach, some Parmesan cheese or even some sharp rocket. You can use Japanese panko for a crackling crust in place of finer bread crumbs more common in Egyptian kitchens that appear more uniform, almost as one when fried. This recipe below, with its oozing center is open to change. 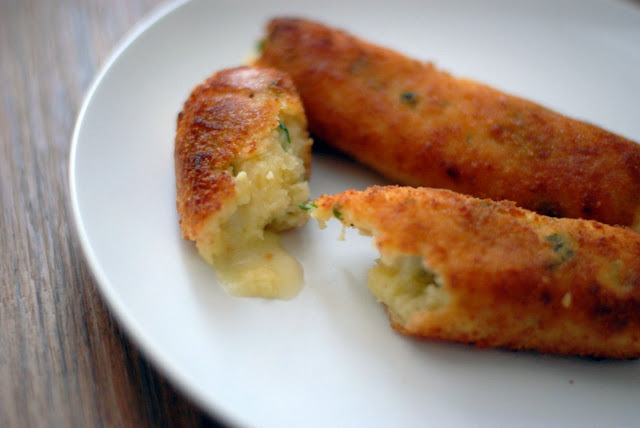 Mustard-Parsley Potato Croquettes
You’ll need
800 grams of potatoes, washed, skin intact
20 grams of butter
1 egg yolk, beaten
4 grams of ground mustard powder
15 grams of parsley, roughly chopped
Salt and freshly ground pepper to taste
1 ball of mozzarella, approximately 66 grams
2 eggs, beaten
130 grams of finely ground bread crumbs
Wash the skins of your potatoes well then dry. Arrange the potatoes on a baking sheet after pricking each one a few times. Make sure not to crowd them. Bake for 1 to 1½ hours in an oven heated to 200 degrees Celsius until tender. Remove from the oven then slice each potato in half leaving it to cool.
Using a spoon, extract the potato flesh into a medium-sized bowl, season with salt and pepper then mash, eliminating any lumps, until smooth. Add the butter then fold in the chopped parsley and ground mustard. Mix in the yolk of one egg until all is combined then begin to shape the croquettes.
Mould a little at a time, depending on how large you want them, into a cylinder. Make an indentation along the length of the croquette with the opposite end of a teaspoon and add a few thin slices of mozzarella. Pinch the indentation you created to seal the mozzarella into the potato. Adjust the shape by rolling once very lightly, back and forth. Dip each cylinder into the breadcrumbs then the beaten egg then back to the breadcrumbs. Repeat until you’ve finished the potato mixture.
Place your croquettes in a freezer-friendly box lined with baking paper. Between each layer and the next, add a size-appropriate sheet of baking paper to avoid the croquettes from sticking once frozen. Freeze for an hour or until ready to fry. Fry in hot oil (around 7 cm) in batches until the croquettes are crisp and golden. Drain on paper towels. Serve hot.