I enjoy connecting with other Egyptian food bloggers, maybe it's because there aren't many of us; maybe because I can't seem to find enough Egyptian ladies interested in the kitchen the way I am.  I recently found another kindred spirit and thought I'd share. Noha Serageldin is new on the scene. Starting in August, she's already got a bunch of posts for you to consume and her pleasant, friendly voice comes through -  genuine, honest with a constant urge to learn. Support her on her journey and connect with her directly on her blog Matters of the Belly, on Facebook, on Instagram, on Twitter & on Pinterest. Here's Noha below. Make sure to try out her recipe.

I have a borderline obsessive love for eggplants. So much so, that I seriously contemplated calling my blog ‘The Anxious Aubergine’ before settling for ‘Matters of the Belly’. I kid you not. There is something quite magical, I find, about how its spongy and seemingly inedible interior in the raw state transforms into this incredibly creamy, sweet and earthy flesh once cooked correctly. As I mentioned before on my blog, I was one of those weird kids who always loved  vegetables... growing up, just the mention of Moussaka or Fattah for lunch always got me excited.

Not much has changed since then… if anything, my love for vegetables has continued to grow as I have… and now, I am always on the lookout for new ways to enjoy them. Especially eggplants. Technically, the eggplant is a fruit from the berry family. I know, shocking right? However, I refuse to call anything a fruit if it cannot be part of a fruit salad (you heard me, tomatoes), so I shall proceed to refer to it as a vegetable. Go ahead, tell the veggie police… I like to live on the edge.

This recipe is inspired by a classic Turkish dish called ‘Imam Bayildi’, which translates to ‘the Priest fainted’. Legend has it that a Turkish Imam fainted when his new wife prepared him this dish; some say it was because of how delicious it was, others claim that what caused him to faint was the fact that the dish used up all the olive oil in his dowry. You see, traditionally, the eggplants are meant to be fried, and anyone who has ever cooked with eggplant before knows that it is a SPONGE for oil, and sucks up obscene amounts if you allow it. As tempting as that sounds, I choose not to fry them, for the sake of my expanding waistline. Also, the original recipe is vegetarian, whereas in my version I add minced beef to the stuffing, which is how we have always made it in our household.

As it always is with family recipes, this one has evolved and changed each time I make it, resulting in a version I can proudly call my own, yet still reminds me of the Imam Bayildis of my childhood. Our family cook of over 30 years, whose name is Iman, liked to joke that this dish was named after her, and called it Iman Bayildi. I still call it that, and it never fails to give me a warm, fuzzy tingle in my heart each time I do. 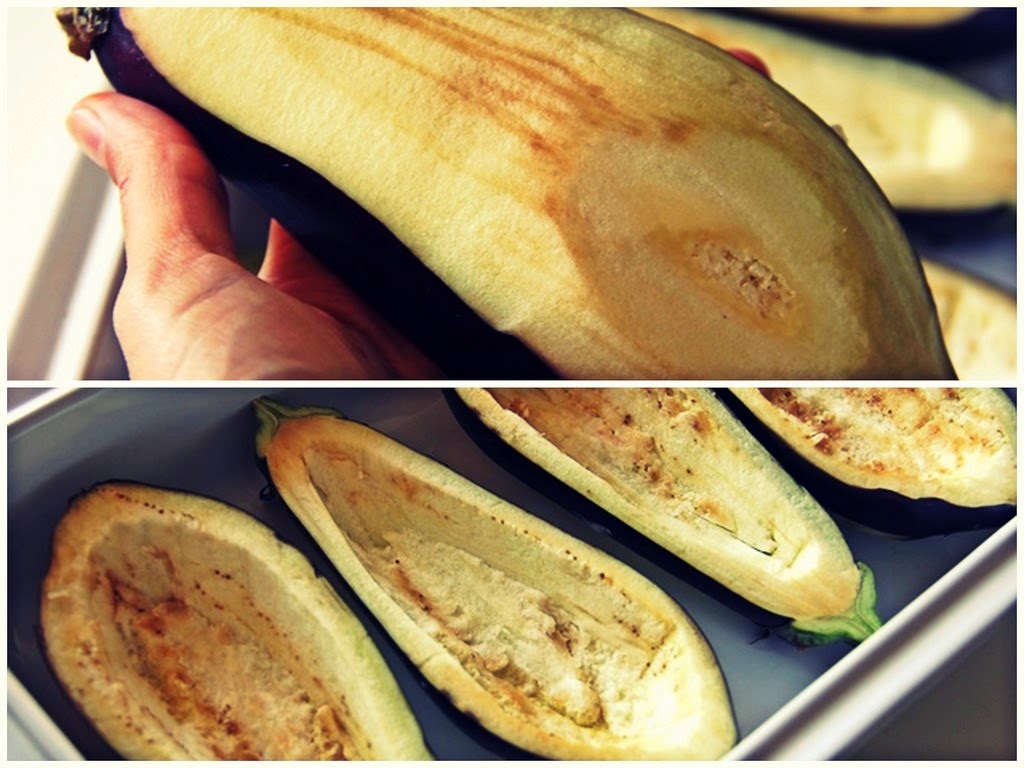 Wash & dry the eggplants, then slice each lengthwise in half. Using a vegetable peeler, peel the skin, leaving a 2cm border along the edge (as shown in photo). If you are using smaller eggplants, you may leave the skin on if you like, but mine were on the larger side so the skin could be too tough and bitter.

Using a spoon, scoop out about a third of the flesh of each eggplant half, then set aside. Chop up the scooped up flesh into small pieces (to be used in the filling).

In a large non-stick pan over medium heat, add the olive oil and onions. Cook until softened, about 5min. Add garlic, cook until fragrant, about 1min. Add the minced beef and cook until colour changes.

Add the chopped up eggplant flesh and the spices, cook until the beef begins to brown. Add the pomegranate molasses & raisins, season to taste and remove from the heat.

Using a spoon, stuff the eggplant halves with the mixture. In a baking tray, pour in the tomato puree/sauce, and arrange the stuffed eggplants on top. Drizzle liberally with olive oil and bake in the oven for 25-30 minutes, until the eggplant is soft and slightly golden.

If the stuffing is browning too fast, you may cover the dish loosely with some foil.

Meanwhile, in a small non-stick pan over low heat, melt the ghee if using and add the pine nuts. Cook, stirring continuously until golden. You may do the same without the ghee (dry toasting) if you wish, but the ghee just gives it the most amazing flavour.

When the eggplant is ready, remove from the oven and sprinkle with the toasted pine nuts and basil/mint leaves. Serve immediately.