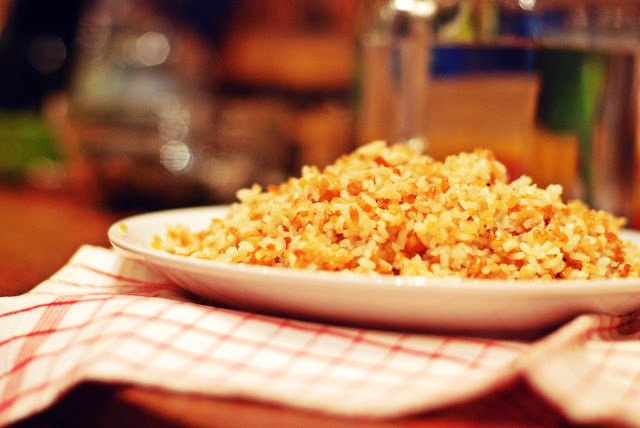 Special to The Daily News Egypt
When my mother is in the kitchen, she likes to talk about my grandmother; I don't think she realizes that it has become a pattern. As she stirs, today a creamy mushroom soup, tomorrow some strawberry jam thickening on the stove, she remembers her own mother's hands, how they tailored dainty dresses and kneaded soft and supple biscuit dough. 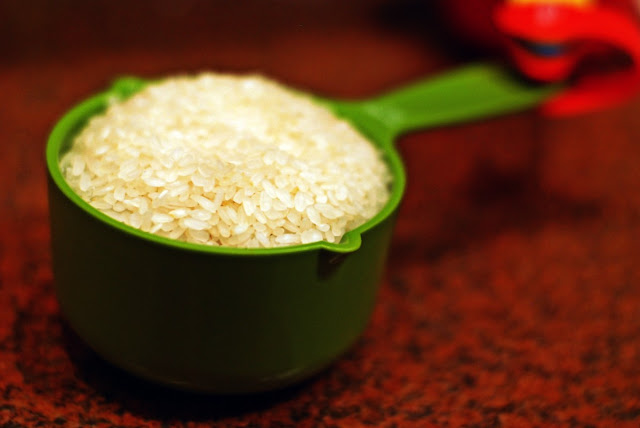 My mother-in-law skims her freshly chopped molokheyya soup as it simmers, the same method used to skim greasy fat rising to the top of a bubbling chicken stock. She does it out of tradition, a custom that was never intentionally passed on by her mother but viewed through the eyes of growing children who would one day instinctively emulate what they once saw long ago. She retells stories of her mother, a refined woman from the city traveling through the countryside in the 1930s with her doctor-husband and eight children in the making, and of how she would awake early and trundle out to cook the day's meals thus eliminating the smell of cooking in the house if she were to receive visitors later in the afternoon or how she would exercise her fingers on the piano or listen to the radio as she sewed on her treasured sewing machine every morning. 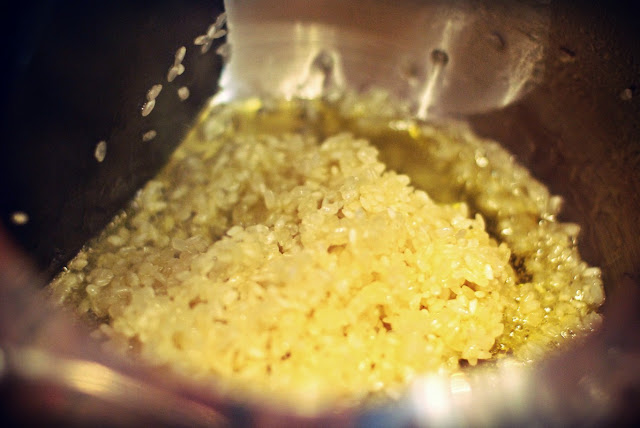 My newly married sister has picked up on preparing food beforehand and freezing it for a later date in the same fashion that my mother continues to do today. I have a feeling that she will always have homemade burgers on hand and will offer them up readily to the hungry stomachs that visit.
A close friend insists that the only way, her mother's and grandmother's way, to make goulash, a savory beef and phyllo pie, is without a trace of tomatoes and a healthy dose of beaten egg and milk; another friend explains that it can only be made with stock to give it a crunchy base like that of the one she grew up with and a rich tomato sauce to complement the ground beef filling. This is the way of tradition and preserving identity. 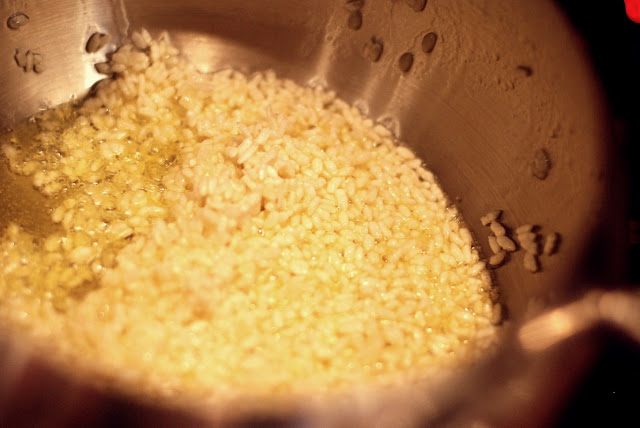 We are constantly shaping the way our traditions look for future generations. I wonder if our children and grandchildren will know half of what we today are learning from the generations that grew up in an Egypt that they wanted to remember. Will we too pass on these same traditions or are we forgetting our heritage? Why is it that when I talk about Egyptian food, many Egyptians insist on notifying me that there is no such thing as Egyptian food? 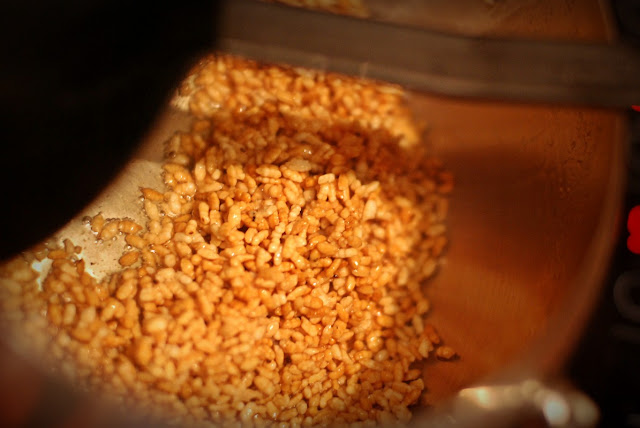 What of Upper Egypt's sun bread known as “shamsi bread” that is left to rise in the sun and is baked today in a method that dates back to the ancient Egyptians? What of Egyptian desert truffles known as “terfas” rumored to be created by a magical lightning bolt and also highly appreciated in ancient Egypt? How many Egyptians begin to preserve their leftover fruit in jars of jam or pickle their vegetables for the winter? 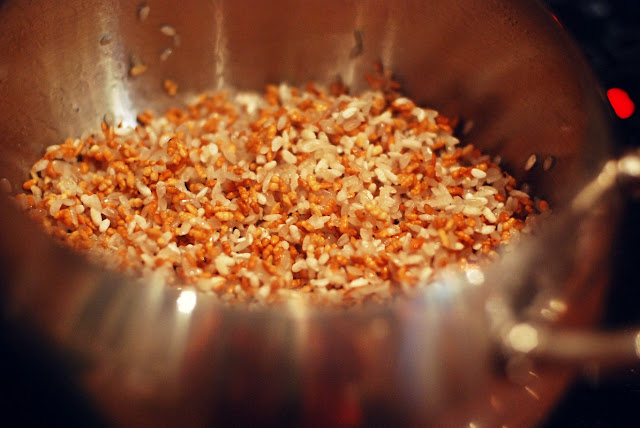 No longer do many of us know our own history away from the wars and military achievements.
While countries everywhere embrace the little that they have been blessed with, the relationships they have formed or the cultures they have cultivated, we continue to run to the French and Lebanese for inspiration, the Gulf for religion or live forever trying to find ourselves like the Americans on television.
Even today, many of us are looking toward Malaysia in hope that maybe we could become “like them.” Malaysia has now officially banned protests and political marches, its Muslims cannot enjoy a glass of wine in public without being monitored or arrested by plain-clothed police and the differentiation between the three Main Malaysian races — Malay, Chinese and Indian — is clear to anyone willing to question bravely. When did we become tired of our own fertile ground? 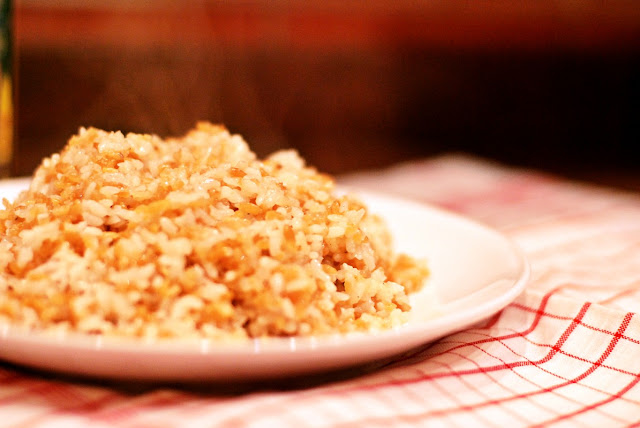 Today, take a look around you and learn from an Egyptian that knows more about a facet of Egypt than you. Disregard the political parties you don't agree with for a moment, turn a blind eye to the unknown future and take note of a tradition from our past. This recipe belongs to my grandmother who used to feed me chicken soup and boiled chicken for the first years of my life believing that it was the way to true health. Introduced to me by my mother, it has become part of my home as well and has found a place in my husband's heart.

Begin by rinsing the rice in a sieve. After draining, separate the rice into two equal halves. Place a pot on medium heat. Add the ghee and wait for it to melt and ripple. Add half of the rice to the ghee and mix together with a heatproof spoon. At first, the rice will stick together and seem like it won't come undone. Continue to mix. Gradually, the rice grains will start to break apart to form the loose grains they were at first. Keep stirring the rice for 2 minutes. It will begin to turn a light gold color. Continue to stir until it reaches a deep golden shade. Once you have reached the desired color, add the second half of the rice. Mix to combine both and add 2 cups of water. Bring the water to a quick boil and reduce the heat to a low flame. Cover the pot and leave to cook undisturbed for 15 minutes. Uncover the pot, taste to test the grain of rice. If it remains resistant, cook for another 3-5 minutes. Serve hot.