Roasted pepper dip for the pepper-averse

I have a penchant for bell peppers. Eagerly consuming them in all colors and shapes, I cannot begin to comprehend why someone could be averse to their sweet tanginess. After marrying one of those pepper-averse people we were just talking about, it became clear that I would have to do everything in my power to get him to switch to the other side, my side, the sexy peppery side. I have tried calling it "capsicum" the way my mom taught me to sway him. I have disguised it in a plethora of chopped bird's eye chili.  So far, I have succeeded on two counts:

1. Adding it to prawn will lead to consumption.
2. Roasting and puréeing it will befuddle then befriend my husband's taste buds. 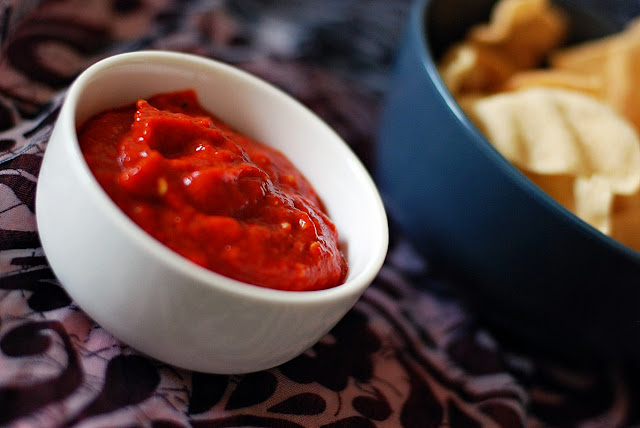 Below is my column featuring this recipe in The Daily News Egypt dated Saturday, October 22nd, 2011.

I love the sweetness of the humble bell pepper, or as I called it growing up, capsicum. I search for it when tasting new dishes and try to incorporate it into lots of meals. Raised in a home of pepper-loving parents, they would invite the many colored peppers to many of our lunches – red ones peeping out of a corn salad and green ones generously spread on a pizza. We'd have shrimp baked with peppers and onions after school; at night, they would come out, freshly sliced, to bring up a grilled cheese sandwich. I've been programmed for years to love these things and needless to say, I'll fall for most recipes that use bell peppers, especially roasted, to accent a dish.

When I got married, I rushed excitedly to the grocery store, picking up ingredients I was already familiar with and came to a screeching halt in front of the peppers. Look ma! They have all kinds of colored peppers including purple peppers, black peppers and even baby colored peppers!

“This is going to be so much fun. I'm going to make chicken fajitas and it'll be great,” giddy me thought.

The giddiness didn't last long. A few polite lunches later, my husband decided to break the horrible news. He didn't like peppers – not on pizzas, not in salads, not stuffed. No way, no how.

And then I started roasting them, featuring them in tarts, pizza sauce and tangy eggplant salads, luring him into believing how magical these sweet fleshy fruits are. After two years of tirelessly experimenting to allow him to enjoy peppers, he found a midway love for them and has even promoted them at the table when we're hosting a dinner party.

There are a number of ingredients that may not sit well with the people you love. It is said that it takes 15 to 20 times of eating something to get used to the taste. Instead of deliberately avoiding these ingredients, gather the courage to serve these individual items in different ways, sometimes disguised and at other times as a side, until you find some acceptance from the disbeliever.

This recipe - served alone as a dip, used as a sandwich spread or an addition to a sauce – has worked to my benefit. It makes way for the sweetness of the peppers and adds punches of flavor to whatever you're working with. If you're not keen on serving it alone, stir it into some freshly cooked pasta or under a layer bubbling melted cheese sitting unsuspectingly on a slice of toast.

Successfully overcoming the minor problems peppers brought to our home, I've now moved onto battling with cardamom, that little pungent pod that imparts much flavor to a dish. Still in the phase of disguising it, I'll let you all know when it shines as the star of a dish in our home.

Roast your peppers according to The Wednesday Chef's instructions. I find that this method yields the best results. Once they're roasted, de-seeded, peeled and ready, place them in a food processor along with the garlic and chili.  Pulse until chunky then pour in the olive oil and vinegar. Continue to purée until smooth. Refrigerate. Keeps for 3-4 days. 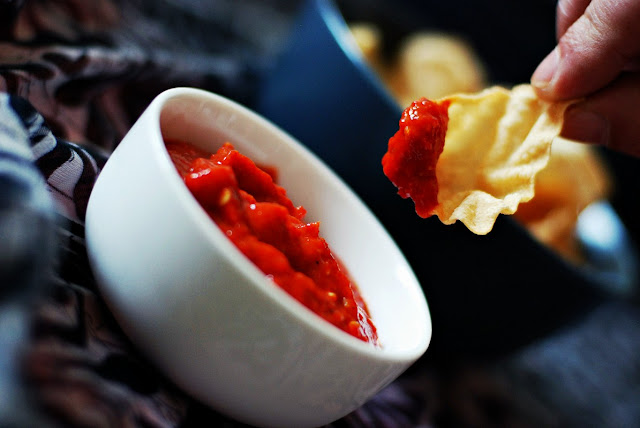 We used papadums this time but you can use anything - from crusty bread to crudités.