Warm Potato Salad (minus the mayonnaise) 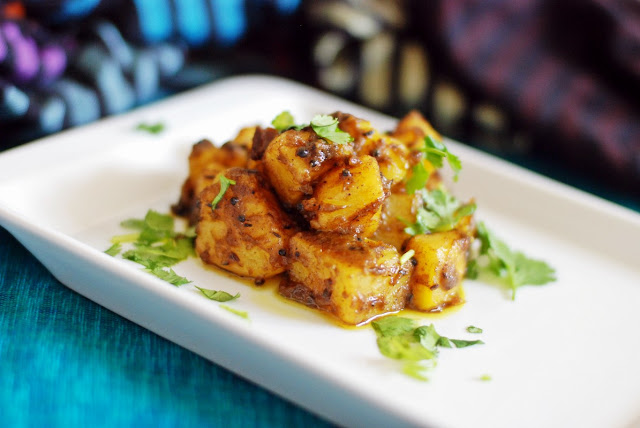 Below is my column featuring this recipe in The Daily News Egypt dated Saturday, July 16th, 2011. 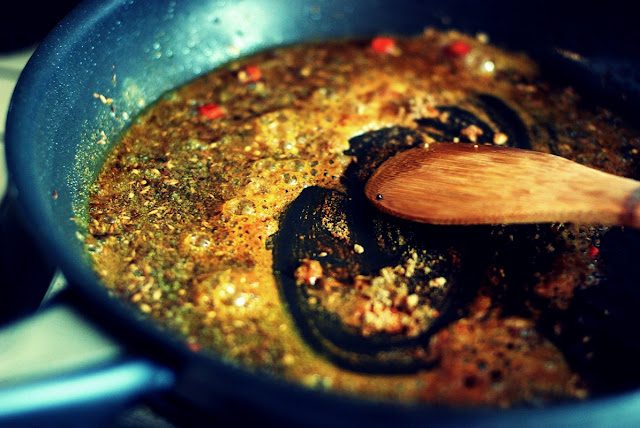 A dish that puzzles me to no end is potato salad. I've spent many moments questioning why people insist on calling it just that, “potato salad” despite their variations of it being so far apart. In my mind, a few things were certain. Potato salad is generally eaten in the summer. You'll never know what kind of potato salad you're getting until it's plopped in front of you. The inclusion of carbohydrates into a salad doesn't always make it good.

My mother's potato salad is one I enjoy. With her incorporation of fragrant herbs, potatoes that crack under the slight pressure of my fork, and the light drizzle of a zesty vinaigrette, it never fails to startle my taste buds into summery freshness. It has also traveled with us to any city we moved and has been a stable constant in a constantly changing household.

As you grow older, you begin visiting friends' homes and you begin to find out that their mothers, too, have potato salad on offering. Initially, I thought it was just that one friend's mom that adds a gloppy mess of store-bought mayonnaise to a bunch of other ingredients that I could never decipher. It turns out I was wrong and even at the age of 11, I could begin to tell that gloppy mayonnaise was a trend by the sheer abundance of it.

This made me realize then and there that while my mother's approach to cooking was still heavily influenced by the French kitchen, other mothers were well on their way to becoming well-versed in the ways of the Nineties' American kitchen – frying, substituting sauces with melting cheese, and using mayonnaise as a key ingredient in as many salads as possible.

This mayonnaise-laden salad began to make an appearance at barbecues, potlucks and picnics. It was easy to pack and the ladies proudly putting them together could ensure that there would be no wilting greens staring sadly up at them when it came time to serve. While those ladies rejoiced, the people who did not participate in the cooking were served double helpings of a potato salad that fell to pieces at the gentle prodding of their fork - potato salad that would rather be called Mayo-mash.

Usually, the equation of store-bought mayonnaise plus potatoes and not much else leaves me recalling childhood memories from my registry of regret but as I approach my 27th birthday, I realize that this registry cannot take much more salad sadness so I've decided to put a list together of some basic potato salad suggestions.

A good potato salad needs texture so it's best to use a low to medium-starch potato. These are generally known as waxy potatoes and are the sort that hold their shape well so they don't take a beating as easily.

Try to use fresh herbs and spices to bring up the flavor or you'll end up with a bland, avoidable dish. Always add the spices to the potatoes when they are hot as they tend to absorb more flavor that way. If you're feeling more adventurous, you can add almonds for a bit of crunch or green beans to the mix.

If you insist on using mayonnaise, experiment by flavoring it with a dollop of whole-grain or Dijon mustard and a bit of garlic. Know that if you decide to eliminate the mayonnaise or creamy dressing, your potato salad will hold up better for a longer period of time, especially if you're making it for an outdoorsy summer event. That and the fact that it'll be lighter on the stomach.

Using mayonnaise or creamy dressings also means that your potato salad should remain chilled at all times to avoid the dressing spoiling because of the heat.

Look at your potato salad as a dish that should take some attention off the mains instead of being an unnoticeable accompaniment made up of creamy, starchy stuff. You could skip the mayonnaise all together and make a vinaigrette of lemon juice, mustard and olive oil. You could even replace the waxy potatoes with roasted sweet potatoes. The ideas are endless, the way it should be and only after writing this do I understand why people call it Potato Salad. There's not much else you can call it without sounding esoteric. Here's my version that can be served without chilling but works equally as well straight out of the fridge. 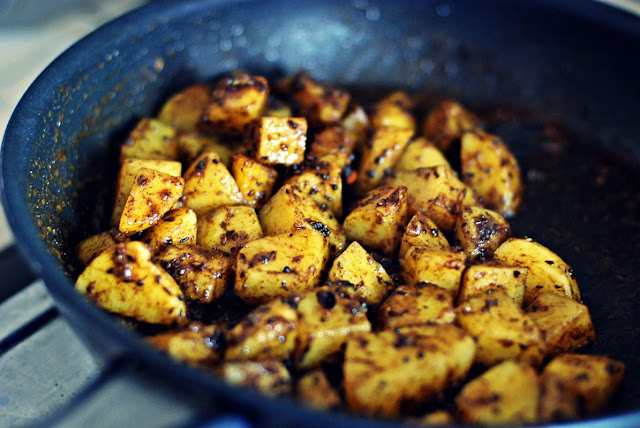 Par-boil the potatoes for around 15 minutes until slightly tender. Remove from the heat and leave to cool. Peel the potatoes then cut into large cubes. Heat a large frying pan over a high flame then add the oil. Add the cumin and mustard seeds along with the sliced fresh chili.

Leave for about 30 seconds then add the cumin, coriander and chili powders as well as the turmeric. Lower your heat to medium and stir to combine all the spices. Once fragrant, add the potatoes and mix until they are well coated in your spice mixture then add the salt and water.

Allow the water to be absorbed by the potatoes but stir every minute or so for around 5 minutes so that the potatoes don't stick to the bottom of the pan. When the potatoes are almost dry, squeeze the limejuice on top, stir to combine then turn off the heat and allow to cool. Before serving, add a handful of fresh coriander. 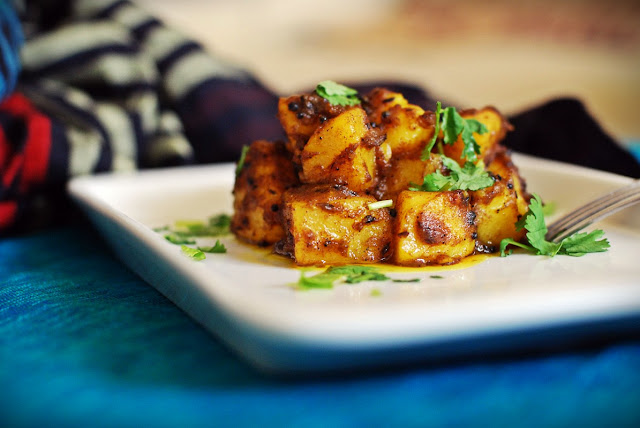